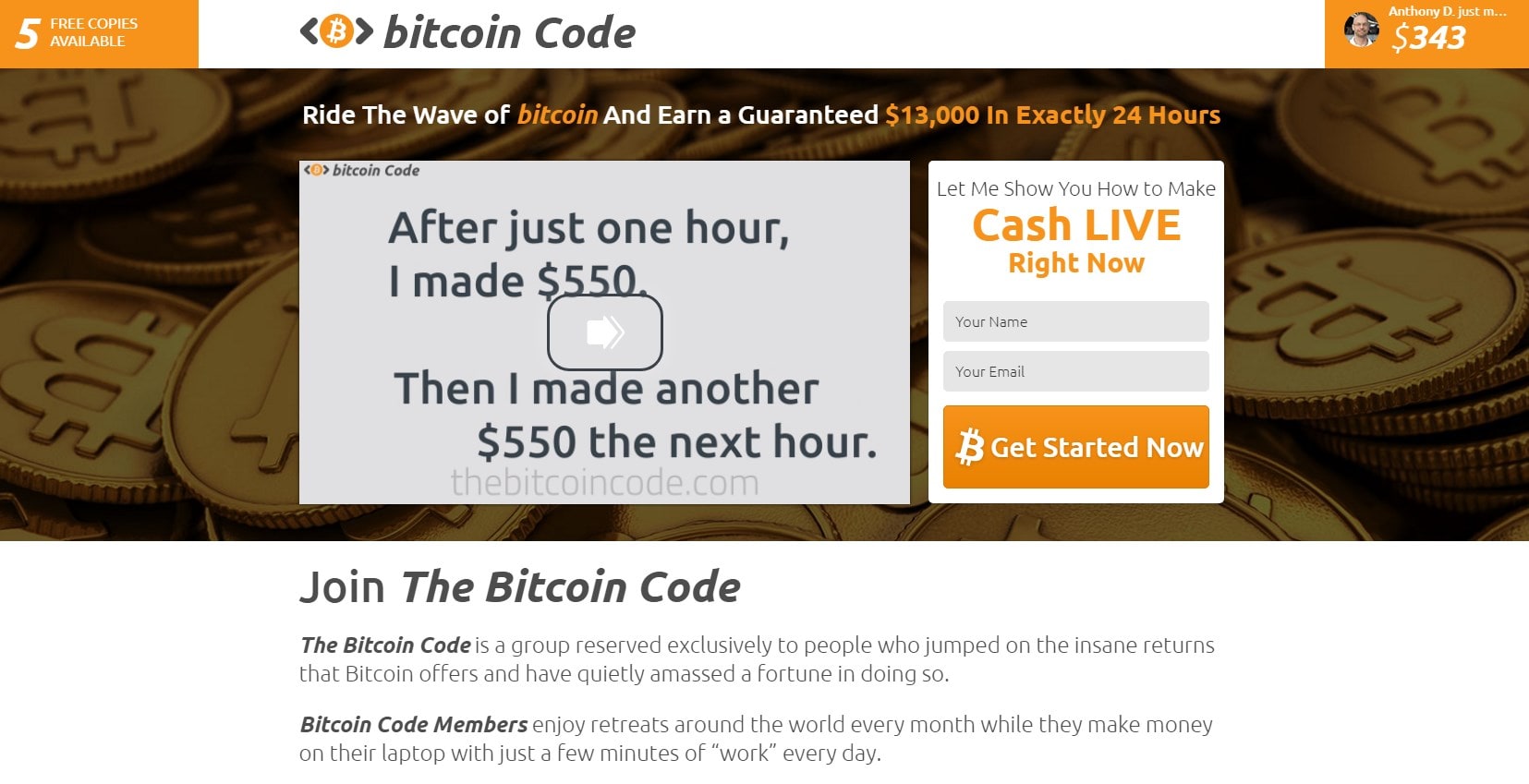 Anyone who has ever thought about jumping into trading bitcoin online should read our full Bitcoin Code review. Most people reading this review will probably already be familiar with cryptocurrency owing to the fact that it has recently made waves in financial markets across the world.

The Bitcoin Code is a platform that claims to exploit the cryptocurrency markets by parading as a trading system which is more than a scam, to say the least. These people are trying to convince everyone that they should put their hard-earned money into this con.

In our experience reviewing trading platforms and brokers, we have come across many scammers who use various tricks to attract people. But the interesting thing about Bitcoin Code Review is that it has nothing to do with Bitcoin.

These people only want your money, and because that’s their only goal they will say anything to get it. We strongly advise you not to be tempted by these outlandish claims. However, read our full review since it exposes this system for the scam it really is!

The Bitcoin Code is a huge scam and lie

We would just like to start out by clarifying our stance on Bitcoin Code which is that we think it is a scam. The saving grace for many gullible people out there is that the fraud has not been running for long.

But the bad news is that it has already scammed dozens of people. Though scams in our experience make outlandish claims but the Bitcoin code and its subsequent promotional video break all records with fake images, and a web of intricate lies.

While we have seen our fair share of scams, this is one of the most brazen examples we’ve come across in some time. Everything is such a big lie that its hard to know where to begin.
Let’s start with the founder and CEO of Steve McKay who claims that he made more than $100 million using the software he developed.

But because Steve is such a nice person he’s decided to give away a free membership to just a few people. Then again he wants you to buy the idea that he’s doing this out of the goodness of his heart.

When we did a bit of research, it was not hard to find out that this Steve McKay character is a fantasy. But then who is the guy in the picture? A quick reverse image search using Google turned up a Frenchman with a totally different name and with no connection to the binary options trading industry.

So, these crooks just decided to cross all manner of decency off their list and use someone else’s photo to promote a fraud. However, what else can you expect from a bunch of criminals? Then we get to the cheap Fiverr actors who are featured in the promotional video.

Both these characters are freelancers for hire on the scam network. They claim to be making over $5500 a day using the Bitcoin Code software. But if they are making their rounds working for $5 per scam artist then it’s clear they are not making even one-fourth of what they claim.

Who is really running the BitCoin Software?

We have already established that stealing someone’s identity and posting fake testimonials is the hallmark of a scam. But just in case you wanted to give them the benefit of the doubt lets take a look at their marketing and examine the claims of earning huge amounts.

By a scam’s standards what they claim and what they advertise is just insane. One of the testimonials claims that they made over half a million dollars in just six months of running the software.

But anyone who has done some trading will tell you that the figure is overly exaggerated. Even if you use the best legitimate software on the planet your win rate will be between 85-90%, and that’s on a great day, but even that isn’t going to make you six figures in just a couple of months.

This is obviously a paid actor, pretending to be the creator of the system

The plot thickens if you’re willing to look beyond the fake testimonials. All you see are young, beautiful people in every picture. So, you’re led to believe that making a truckload of money led to that youthful appearance, or perhaps they meet and share notes!

They probably meet up on luxury yachts and seven-star hotels while their laptop does all the trading making them $5500 a day. That is the ideal life, but only its way too good to be true. Now we may think that we’ve seen just about every type of scam out there but this one is incredibly funny because it assumes that people are really dumb.

Though in reality, the Bitcoin Code Platform is no reason to laugh. These guys are sucking people into giving them a lot of money. Also, a lot of what we’ve managed to expose many people may not be aware of.

Many have been conned by these people and have ended up helplessly watching their money vanish into thin air. Don’t even consider that you stand a chance of making any money with this platform. Signing up is not even worth your time so don’t get sucked into their skewed perception of reality.

What to expect when you join the Bitcoin Program?

When you want to test out a scam binary options service like this one you’ll use a fake email address. Once you enter that email address, the website normally takes you to another section that uses hard sale techniques.

The signup process looks easy, but there are quite a few hurdles to overcome

But that’s not the case with Bitcoin Code though. What they do is take you directly to the website of their unregulated and obviously untraceable broker who will give them a commission for every victim referred.

Even after testing the service twice, there was no doubt that they were sending us to a different website, in this case, it was 888.trader and 10 markets. Both of these brokers are crooks and are known to run away with people’s money. So, once you put in that case, you’ll never see it again. Why would you entrust your money to known crooks?

The Bitcoin Code software has only been around for a couple of months and its amazing as to the number of people who claim to have made over half a million dollars in six months! But it’s important to note that the people they are targeting are newcomers to the trading industry and have no knowledge of how things work. So, they don’t have a proper reference point to weigh in the claims made.

Though we were not surprised as to how many fake review websites these scammers were able to convince to be favorable towards them. Many of these websites give them five-star reviews. But these review websites are part of the scam.

So, you’ll want to disregard whatever they say. You may also want to let everyone you know including those who were unlucky enough to invest know that these people have been exposed, and they are proven crooks.

Start trading now by opening a FREE account to a TRUSTED Binary Option Robot by clicking the link below:

We can say for sure that the Bitcoin Code app is a scam and nothing else. We think that they are shamelessly lying to people about everything and not just their service. The entire business or its foundation to be precise is based on a lie. The mountain of evidence is substantial, and anyone who is not convinced just wants to lose their money.

Do you really think that this is the best way to make money? You will get money for just sitting around and running a software? Anyone who tries to sell you this lie is your enemy. So, do yourself a favor and steer clear of this scam and others like it. Our review exposes it in the most comprehensive way, but it leaves you to make up your mind too!